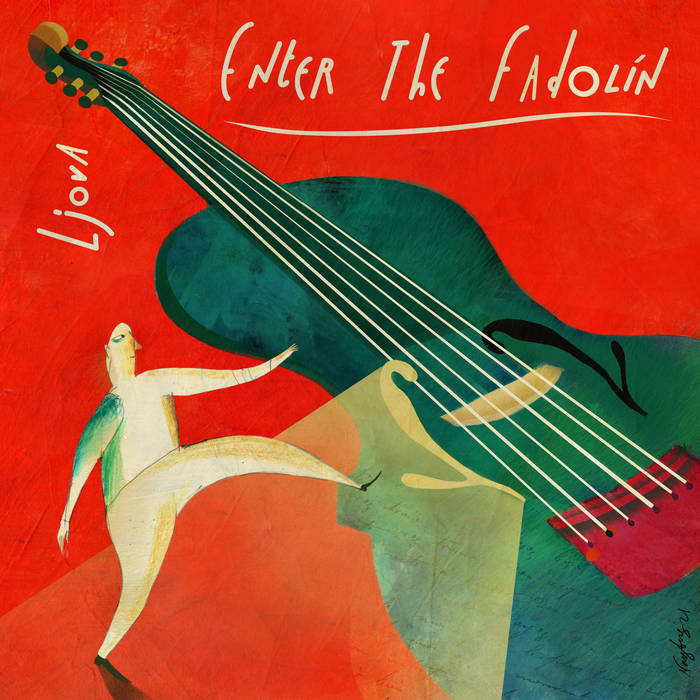 Today I’m grateful to be able to share with you a new album -- my eleventh! Everything here was recorded with just one fadolín, without overdubs, in my home studio. I am excited to share my fadolín obsession with you.

You can pre-order “Enter The Fadolín” exclusively via Bandcamp, which will give you access to all tracks except one, in a variety of formats including mp3 and 96k/24b masters. You can steam the album from Bandcamp (or via the Bandcamp app) for free. Sheet music for most tracks, as well as a CD option, will be posted very soon. The album will also be available on streaming platforms starting January 14th 2022, its official launch date.

Enter The Fadolín -- The fadolín is an instrument roughly the size of a violin, but with a crucial difference -- where a violin would have four strings, the fadolín adds two strings to the bottom (“Fa” and “Do”, or F and C), extending the fadolín’s range almost to the bottom of the cello. The fadolín's extended range presents an opportunity to explore a new sonority, a different culture of sound. It’s not a violin or a viola or a cello (or a gamba, viola d'amore or a violoncello da spalla) -- it should have its own story to tell. This album attempts to jumpstart that story, to build an initial set of repertoire for the fadolínists of today and the next generation of tomorrow.

How did we get here? In 2005, I heard Zach Brock play a 5-string violin with his band The Coffee Achievers at Carnegie Hall's Zankel Hall; that same year, I heard Kyriakos Gouventas play a 5-string violin on tour with vocalist Savina Yannatou; elsewhere, I heard Zoltán Lantos, also on a 5-string violin; I also heard a recording of Tracy Silverman performing John Adams’s “Dharma at Big Sur”, a concerto for electric 6-string violin. These were my first experiences of being exposed to the tantalizing "notes out of range" -- too low for the violin, too high for the viola -- and hearing the impossible notes and sonorities dazzled me.

Zach Brock introduced me to the mastery of the luthier Eric Aceto. At the time, Eric was building a new instrument - he wasn't sure if it'd be a five string or a six string, but it would be built on an instrument body larger than of a typical violin. A few months later Eric came to New York City to show the completed instrument he called a "Mezzo 6-string", inspired by the Violin Octet work of Carleen Hutchins. I fell in love with the sonority, with the F string especially, put down a deposit, renamed that instrument as a "famiola" (viola with a Fa + Mi, or FA-MI-(vi)OLA) - and a few years later, as I was beginning to work on music for a collaboration with choreographer Aszure Barton (that would form the basis of my album “Melting River”), I bought another instrument from Eric, a smaller, violin-sized one that I dubbed the "fadolín" (FA-DO-(vio)LÍN).

Over the course of a decade I would use Eric’s fadolín and famiola extensively in my recording work, overdubbing string sections, and for a time I focused on creating new works for the fadolín and a suitcase of looper pedals (resulting in the album "SoLò Ópus" and a number of extended "looper symphonies") -- but very little of my looper repertoire was notated or available for someone else to play. I was creating a lot of new music but not yet leaving a thread for someone else to continue.

When composer/bassist Jherek Bischoff told me about the crowdfunding site Patreon, I knew right away of the ideal Patreon project, scary and exciting, one that I could work part-time between other commissions and collaborations. I knew it had to be music for solo fadolín -- something portable that didn’t require electricity or amplification, a set of repertoire I could perform “at the drop of a hat”.

The first four pieces on this album are all miniatures rooted in the key of F, the lowest string of the fadolín. “Chaika Blues” was written in the cafe of the Chaika Swimming Pool in my native Moscow, “Courante de Maman” at the Maman coffee shop in Manhattan. Deliberately, I composed these pieces without the fadolín in my hands, so as not to let my habitual ways of improvising get in the way of the music. By contrast, “The Early Voter” was improvised outside of our polling site, for voters in line, and “Seacliff Serenade” was improvised at a beach south of Santa Cruz, California. Two additional pieces on the album were composed in pencil -- “Baltic Melismas” was written in Palanga, Lithuania, and “Slava” was written in transit.

I had intended to continue writing pieces without the instrument -- but as the pandemic began to take a grip of New York and the planet, the fadolín became my pencil of choice, a more direct way of coping with isolation, a way of healing myself and our community, trying to regain a semblance of normalcy, symbiosis between music and people. I began to improvise pieces on Facebook Live, Instagram and over Zoom concerts, at neighborhood playgrounds and on our street corner on good weather days, later transcribing these ideas from recordings into compositions. On this album you'll hear the interplay of fully notated works that may sound improvised, and fully improvised works that were notated and re-recorded from transcriptions. The line between spontaneity and learned / formalized material has for me always been mysterious and fluid.

In 2020, my father, composer Alexander Zhurbin, turned 75. To celebrate, I asked him to write a new piece for the fadolín -- here you will find the first recording of his wonderfully whimsical and dramatic "Fine Fantasy For Fadolin", which, yes, even pays a slight homage to fado music! You'll also hear two pieces by J.S. Bach, originally composed for the keyboard and re-imagined for fadolín, and a short piece from Bach's contemporary, the harper Turlough O'Carolan, that I learned from Irish fiddler Martin Hayes.

"Going Home -> Leaving Home -> Finding Home Again", an expansion on Antonin Dvorak's famous melody from his “New World” Symphony, is a piece that was born on the street corner. I played it for the unsheltered and the delivery bikers on our streets during the pandemic summer of 2020, hoping that they will once again find a home. "Light", spontaneously recorded as a musical contrast to follow “Going Home”, is an improvisation on the African-American spiritual "This Little Light of Mine".

I'm very excited to share this repertoire for the solo acoustic fadolín with you. I feel that this is just a beginning, and am very grateful that you're a part of it.

Special thanks:
to my papa, Alexander Zhurbin, who wrote a beautiful piece and has always been a fountain of humor, resilience, knowledge, inspiration and love;

to my mama, Irena Ginzburg, who has always encouraged my every move (and my aforementioned papa) with boundless love.. All those childhood violin lessons were really helpful for learning the fadolín..

to my wife Inna + our kids, Benjy and Yosi, who have tolerated my obsession with growing the fadolín through a pandemic and beyond…

to my Patreon backers who have supported this music from the first note;

To Eric Aceto, luthier of my famiola and first fadolín, restless inventor and advocate, who has poured so much of his energy into researching the sonic possibilities of the fadolín and other non-traditional string instruments, in addition to making his own amplification systems, and being a fountain of knowledge and inspiration, and so much more. Without Eric’s bold quest with the fadolín, it’s unlikely that any of this music would have been written.

To Nathaniel Rowan, on whose first fadolín this album was recorded -- Nathaniel's fadolín was fortuitously delivered to me a few weeks before the pandemic, and it has been a real joy to get to know this instrument and the music it weaves through the long months of isolation;

To Jherek Bischoff, kindred spirit, who told me about Patreon, whose encouragement launched me on this leg of the journey;

to Tracy Silverman, Zach Brock, Kyriakos Gouventas, Zoltan Lantos, and others who have blazed this trail, to every luthier who had expressed encouragement, wonder, disbelief or all of the above.. To my viola teachers Samuel Rhodes, who gave me a Zoom lesson on the “Chromatic Fantasy”, twenty years after my graduation, and to Karen Ritscher, who always strove for her students to be comfortable and pain-free.

to Yevgeniya Nayberg for the beautiful cover art, for taking an idea and making it her own.

to John Kilgore for his mixing talents and decades of knowledge, and to Steven Berson for mastering ten of my records with musicality and attention to the smallest details.

Thank you, friends, for listening!

Track 10: composed by Turlough O'Carolan, arranged by Ljova with inspiration from Martin Hayes

Track 11: variations on a theme by Antonin Dvořák, composed by Ljova

Track 12: improvisation on "This Little Light of Mine", African-American spiritual

recorded on a fadolín by Nathaniel Rowan (2020)